No. 5 from The Howgill Fells

My machine and I rumble into the village looking like a part-abandoned engineering project.

So, what do we discover?

It’s a very small to start with. But don’t be misled. Don’t think the world of enterprise and commerce has passed by on the Tebay / Brough road, a couple of hundred yards to the west. Oh, no. On a wall in front of a rather splendid house is a plastic Tupperware box. The box is anchored down by an attractive local rock. Next to the box, a sign: ‘Duck eggs. Free and tasty. Help yourself.’ (I’m wondering if the sign be described as a billboard?)

I grab a couple of eggs and wrap them in my spare socks in my rucksack. My local shopping is done for the day.

To get an overview of the place, I cycle boundary to boundary, straight through the village. Even at my speed that doesn’t take long. I pass two pubs, both of which have spruced up outdoor areas to welcome their first customers since the crippling lockdown. There are no shops but there is a defunct junior school, a church, a number of expensive vehicles, a number of knackered vehicles and a children’s play area attached to a tennis court.

There’s a beck flowing past the bottom of the village. It’s peaceful and gentle now, but I have seen photos of it in flood and it’s a different beast. Just above the beck on the bank are a couple of yurts. These round tents, the approximate shape of a squashed fez, originate on the steppes of Central Asia. One can imagine Atilla The Hun having ransacked Kirkby Stephen, four miles north, now resting up in a yurt before his march to attack Kendal.

The yurts are pitched not a couple of feet above the beck so surely they are at risk in times of flood? The catchment areas for all the local waterways are vast tracts of hillside so it’s hardly surprising there are floods every now and then. Just had a thought….. perhaps the landowner actually requested a couple of yachts but was misheard.

Approaching the village from above

The church is old, as many tend to be. It’s attractive in a simple way and sits squat in the valley, planted on sturdy foundations in expectation of wild winter weather. Evergreen yews stand sentinel over ancient graves. Their deciduous cousins around the periphery show a hint of spring green, and the grass is tidy. I read that the church is constructed of rubble stone with rusticated quoins. Baffling language indeed for an architectural dunce, so I’m intrigued enough to investigate. In this most isolated of villages I can research on my telephone, that in itself never ceases to amaze me. I’m sure it would have made Atilla’s life easier. Rubble stone is random stuff dug up and used as is, undressed. Much like dry stone walls that are built from local stone redeemed when clearing fields for pasture. Quoins are the large cuboid blocks that form the corners of the building. Rusticated means rough. So, there we are, rusticated quoins are rough corner stones. I’ve learned something. I cycle off feeling smug. 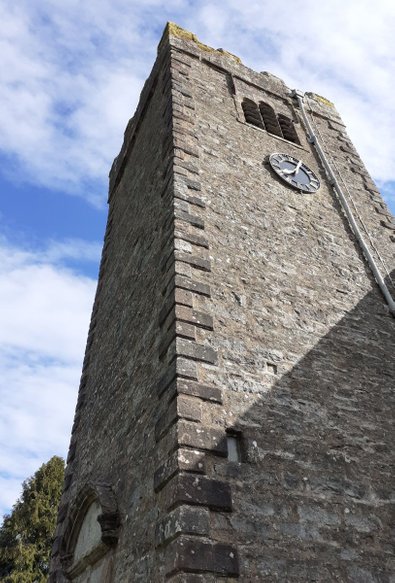 Rusticated quoins and rubbly walls at 8.05 AM

Churches get my attention when I’m idling. Here in Ravenstonedale it’s parky so I need to keep cycling to keep warm. I don’t linger too long but it’s interesting to look. When we boated in France during the summer, temperatures approached forty degrees on occasion, so I’d go into religious buildings to cool off. I wasn’t choosey, I would visit small local churches or giant basilicas. To prove I wasn’t a mere malingerer, I studied acre upon acre of stained glass window, loitering long enough for my core temperature to drop.

I imagine the continental summers in central France could be equally uncomfortable as a nasty Cumbrian winter.

So, what did the locals think of me in their midst? Well, I never found out, because on this particular morning, I didn’t see another soul. The only evidence of life was the duck egg display. Actually, there were two people. They were playing tennis on the public court next to the kiddies play area, which was empty. They were both so well wrapped up, in clothing and their game, that they didn’t notice the green blob gliding by.

Through town I go off at a tangent down a road that has no signpost at its beginning. It’s a road to somewhere and for somebody an actual destination is probably important, but for my meandering, it’s merely a road to another memory or two. I pass honesty boxes near farms that are doing side-lines. Goat’s milk soap is one, various chutneys another. Chutney OK, but I can’t help thinking that goat’s milk soap is a product of out-of-dale, arty television.

I ride between lovely white-stone walls, the fields beyond are bright spring green with grass cropped to a carpet by the sheep. Some of the lanes are so narrow that I really don’t fancy meeting another vehicle, particularly a tractor, some of which are enormous. I’d have to scramble over a wall or turn round and sprint away. Sprint? Mmm.

Thankfully vehicles are thin on the ground. (Unlike me!). The roads are usually around five feet below the wall tops. I can just about see over while riding. I like to stop and stand on the narrow verge between wall and road. This is when it’s truly quiet. There is when I hear morning music, the score written on a silent page. The longer I linger, the more it crescendos. The bleating of a lamb, the lower pitch response by mum. Curlews, carrion-hunting crows, songbirds and geese. There’s not a single aeroplane in the blue sky. Somewhere far off I can hear the rumble of a quad bike. These are the modern workhorses of the hill farmer. Go anywhere beasts that tend the sheep, take them extra food or help a struggling lamb. These lovely animals are the currency of the fells. I utterly respect that and the tough lifestyle that folk hereabouts live.

When the mornings are like this, pristine, I’m reluctant to break the spell. But I must, it’s chilly so my feet are suffering. Besides I’ve got duck eggs on toast to look forward to. 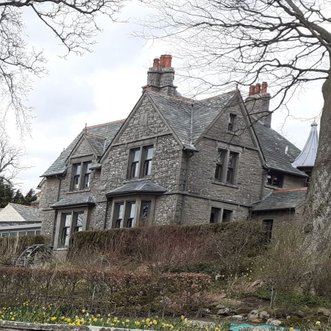 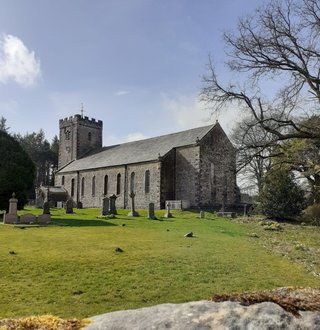