Columbanus is an amazing machine; it seems to know when I need help. It can sense distress. Not sure how it works in all honesty but it seems to increase its power input the more I need it. The steeper the hill, the more the boost. Maybe it can hear me wheezing or sense my nausea. On the flat it all but turns itself off. Downhill it knows I don’t need help so he goes into huff mode and won’t work.

Motor assistance is limited to 15 MPH. If you get to 15 on a bike it’s fun and exhilarating. But mine is not really designed for speed, it’s a mountain bike after all, designed for rugged terrain. Picture those photos from a glossy cycling mag where a supreme physical specimen leaps over a jump, handlebars and frame misaligned like steering into an airborne skid. The backdrop, a tree-clad range of mountains defined by chalk-white, precipitous cliffs.

Yes, you’re quite right, that’s not me!

My ‘big hill’ route is three miles up. I tackle that at conservative speed in first or second gears (mostly first actually). Coming down I reach 35 miles an hour. Not that quick, particularly for a road bike (or racing bike as we used to call them) but quite fast enough for a chunky-tyred mountain bike. If any of you have driven a caravan, perhaps you’ve experienced that unpleasant wobbly motion where the van becomes unstable and starts to veer from side to side. I’m a bit like that. My rear end becomes unstable at high speed (relatively high speed), particularly if I’m cornering. I do get a bit of a thrill out of a descent, usually just after it’s over and I’ve survived.

The wind howls through my jowls and my eyes water. My flobby bits joggle about like a hyperthermic jelly and I lose sensation in my frozen feet. I did toy with the idea of wrap-around glasses, probably blue, but realized I probably looked enough of a dickhead already. Due to my watering eyes I have an idea what Eddie Edwards felt like hurtling down his ski jump with impaired visibility.

I met Eddie many years ago. What a decent, thoroughly nice guy he is. And courage, well, he had a shot at life and took it. He was portrayed as a glorious failure. But not in my eyes. He had more bottle than anyone I have ever met. His Olympics was 1988. (And it was his. Can you remember anyone else who competed?)

I visited Calgary a couple of years later and saw in the distance the ski jumps he tackled, both 70 and 90 metre hills. It was summertime and they looked unnaturally skeletal and misplaced. I have actually viewed a 90-metre hill from the top (in Norway). It looks miles down to the run-off area where the crowd gathers. The actual landing area is just about as steep as the jump itself. And looking down, I can tell you it is mighty steep and a mighty long way to the bottom. Anyone who sets off on that particular journey has oodles of courage or a screw loose. Or both.

Looking at the Calgary jumps from distance I got goose bumps and had a sense of real pride that one of ours had lit up the Winter Olympics. If Eddie had come down my hill on my bike, I get the feeling he would have gone a bit faster, loved it a bit more and smiled more broadly.

I’m slightly cowardly to be fair. Not sure how well the body would heal these days in the event of an accident so I’m slightly circumspect. But I still get a thrill. 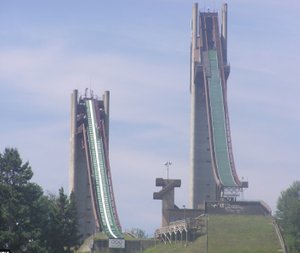 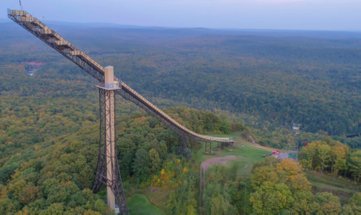 Would you go up there?

The off-road capability does come in handy around my home town of Littleborough because the roads surfaces are so appalling. The other day, one youngster playing hopscotch on a side street hopped straight down a pothole and disappeared from sight. They needed the fire brigade to get her out.

When I’m weary my bike senses it and rubs salt into the wounds. It somehow makes me crave a slice or two of honey-roast ham and a glass of Merlot – and at that point, as if by reciprocal telekinesis, we turn for home and the succour of the larder.

Columbanus has lazy days when he’s not up for it and sometimes I have to put my foot down (then the other). Occasionally I have to bully him to leave the avenue where we live. He claims charging issues or low tyre pressure. It would be too easy to fall for his deception but I have to be strong. Determined. You don’t earn the label ‘elite’ pottering around your own avenue.

Yes, I say we because we’re a team. Columbanus would be pretty useless without me and I would be considerably slower and more knackered without him.

And speaking of knackered. Here is a description unkindly attested me by my brother. He is able to ignore the mass of superlative adjectives available to capture my athleticism and simply describes me as ‘a knackered bloke on a bike…..’

Not wholly inaccurate if the truth be known, though there are other combinations of those words that may equally suit. For example….

Bloke on a knackered bike…..

Bloke, knackered, on a bike…..

Bike on a knackered bloke…..

If I fall off at high speed (which is unlikely)……..

Bike, knackered, on a bloke.

It’s not easy this cycling business so I leave the technical aspects of our sorties to Columbanus, the brains of the outfit. But we don't half get some nice views. 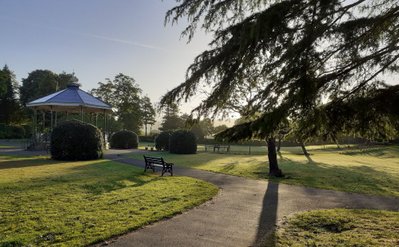 Dawn in the local park 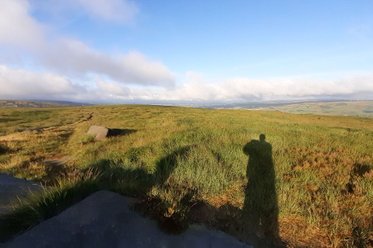 Fatty on a hill on the moors