I love this country and feel the need to integrate more. I’m feeling rather too English.

The natives use specially developed vocal chords to speak a language that has too many consonants. The resulting sound is a guttural, throat-clearing, rasp. The language and it's deployment is quite beyond me.

They are a tall race. In fact anyone over the age of 4 is taller than me.

Our cuisine is different, though both, in part, is good. I like their meat-balls and snert (an explosive pea and ham soup).

We don't appear to have much in common apart from apalling weather. But there is one thing I can join in with........

Cycling. It is a BIG pastime. It's part of the way of life indeed.

From the outset I decided I wanted to look like a proper cyclist in the land of proper cyclists. I no longer wished to be the lethargic relation, wheezing and rattling along in the slipstream of the gods. In short I didn’t want to look English. Unless we make an effort, we do tend to stand out a bit. Still do sometimes! We have this demeanour that looks alien on foreign soil. Some of us are worse than others......

........The budget flight lands in Ibiza and here they come; white legs, black socks, plastic sandals. They lurch across the apron towards the nearest bar ...... you get the picture. Me? Despite making some effort, most of the time I look like a particularly disadvantaged refugee. Somehow I always look a bit ‘knotted hanky’.

I bought my bike second hand. Not just second hand, probably many more. The local bike emporium has an end of season sale each autumn. There are bikes of huge variety, both in specification and cost. Some are ex-demonstrators, high tech electric machines, which are ahead of their time really, at least ten years ahead of the ‘E’ popularity surge in the UK.

Top notch bicycles are reduced from a retail price of around €1200 to perhaps €500. That’s a heck of a saving and the bikes are damn near perfect. The problem is we’re coming into the northerly Dutch winter when it gets chilly - minus double figures at times, not cycling weather. Of course, there are better (less cold) days, but you still won’t get full value for your bike. Being flat, there is usually a wind blowing. From any angle you’re liable to be buffeted by gusts of varying ferocity and temperature. The one you really need to avoid is the northerly or nor’easter. Those can be very unpleasant.

This is the era before my leg problems so I didn’t even consider an electric bike. The one I got wasn’t reduced in price. In fact, it was increased, from around zero to €40 when they put some air in the tyres. I'd found it languishing close to the back fence behind some childrens tricycles - but I recognized it's potential. Now let me tell you this was a pretty good machine. It had more gears than I would ever need, the paintwork was fine, in fact, everything worked perfectly, even the bell which was a polite continental ‘boing’ as opposed to an annoying towpath ‘ting’. It’s just that had it been standing next to it’s more glamorous cousins, it would have, well, dragged the display down a bit. Looked rather English, if you will.

I didn’t need to do much to Europhy my cycling look, (new word there, make me look European in other words). I decided to go with triathlon bars. Know what I mean? The forward-facing looped frame that lets you lean forward on your forearms, hands out in front. An altogether more streamlined look, more elite athlete than, well, Lancastrian! 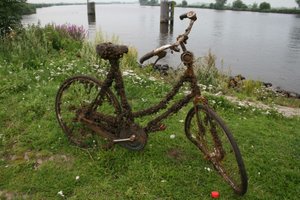 To which I would add triathlon bars 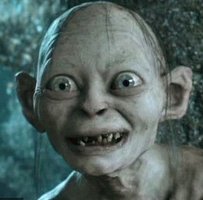 Which surprised the locals

The Netherlands is geared up for cycling. Geared up, huh! Alongside roads are purpose-built cycle lanes, often one each side of the road. Even if they’re just on one side, there’s plenty of room for two bikes to pass. You’re safely out of the traffic and being perched up in a bike you can see for miles. It’s pleasant cycling on tracks that are in the main beautifully maintained. There are even proper white-line markings at roundabouts where cycles have priority over cars. In other words, if a car wants to turn right off a roundabout it has to give way to cyclists who are going straight on. Woe betide the car driver who knocks a cyclist off. The cycle is King.

Road maintenance is good, any problems seem to be rectified quickly. So, picture the scene as I trundle through the countryside….

Half the road is closed for repairs so there are temporary traffic lights. The roadworks affect the cycle lane too so they have built a mini diversion for cyclists. The temporary cycle path turns sharp right, left, left, then right again. Three sides of a rectangle round the work site.

I’m hurtling along, sprawled along my triathlon bars, head down, in a state of cycling euphoria. I feel very fortunate, it's only the elite athlete (a bit like me - ahem) who gets to experience this harmonic rhapsody of man and machine. I look up just in time to be faced with a red plastic barrier. Here I need to register a mini complaint. A design shortfall of triathlon bars is that they don’t have brake levers. It wouldn’t have mattered in this case anyway because I’d looked up too late. Far too late to adjust my grip and reach the brakes on the handlebars proper. I arrived, at pace, at the barrier, which was more robust than it looked. In fact, it stayed still while I kept going.

The line of cars waiting at the temporary lights saw me collide with the bright red obstruction and sail over the handlebars. I wasn’t airborne for long but did have time to glimpse a wide-eyed native watching me from the comfort of his stationary Audi. He saw a pudgy, Lycra-clad missile disappear from view straight into a big hole, followed moments later by his bike.

I was lucky that the hole was muddy rather than rocky so my landing was relatively gentle. Audi man helped me out. Once he realized I wasn’t dead he smiled a bit - as Dutch people do when they get to know you.

Very sportingly, he gave me a lift home. My clothing ripped, a bit bloody, my bike bent. Perhaps he was a cyclist himself, recognizing a fellow icon of the road in a pickle.

Looks like I might have to part with €40 for another bike. I wonder if they do trade-ins. 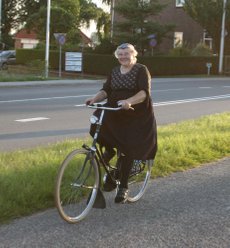 Just how it should be done 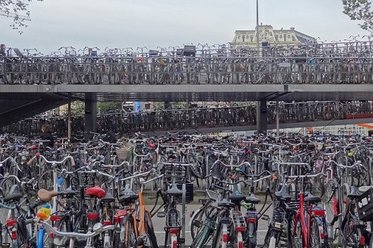 A way of life. Thousands of bikes parked at a railway station