I order some kit (patches and tyre levers) and present myself at Halfords, purveyor of motor car spares and bicycles. Except I forget my phone which has confirmation of my order, so the bloke has to enter everything into the computer manually again. Technology is all well and good and it's supposed to make things easier, but let a 'senior' person loose with it and problems may ensue. In this instance the man in the shop ends up muttering to himself while I feel a bit inadequate. It's not like he's busy though, there's nobody else in the bike section. There's almost no stock either. It looks like someone has ransacked the place, rather a moonscape. (Or a vista from Saturn perhaps - or Sat on! 😊)

I wander around trying to look like a cyclist. Had I not recently bought a bike I wouldn’t have got one here today either. My choice is limited to a small lady’s bike which is non-electric and pink, or a selection of junior bikelets with stabilizers.

£7 for the repair kit and tyre levers.

'You don't need glue, the patches are self-adhesive.' He replies to my enquiry.

Frankly I feel a bit of a knob even asking for glue. Things have moved on since I last repaired a puncture.

As I’m leaving the assistant shouts, ‘You could have bought 4 new inner tubes for a tenner you know. It’s a limited offer.’

Now he tells me! Anyhow, impulse buy? Maybe, but I bought four!

Back in my garage I effect my repair. Repair note, I’d bought the kit and was damn well going to use it!

In the corner is my stepdaughter's mountain bike. I feel sorry for it, poor thing deserved better. In my hands it was the personification of potential unfulfilled. A 'Mountain' bike it certainly wasn't. I scuttled along flat areas like a corpulent beetle. If it's possible to waddle on a bicycle, I did it.

OK Columbanus, time to show what you can do. Let’s go up on the moors. 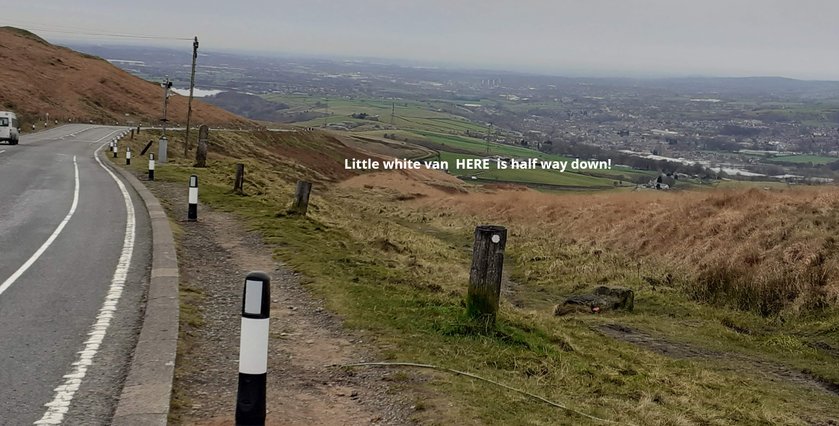 A view from near the top. Yep, I got up there!

The A58 is a trans-Pennine route which connects Lancashire and Yorkshire. The crest of the hill is known as Blackstone Edge. The climb is about two and a half miles long and rises about eight hundred feet. It’s pretty incessant from the outset, a climb that I would have no chance of doing without battery assistance. Well, I could do it, but with lots of breaks and it would be (metaphorically) dark by the time I got to the top.

Being Lancastrian (and more recognizably human than ‘folk from Yorkshire’) I consider the A58 to be an umbilical cord through which we can nourish our less fortunate neighbours. Conveniently there is a non-return valve to prevent a load of old pudding coming the other way. We don’t want to compromise our gene pool after all.

As chance would have it, the border is a little way over the summit. If you’re smart you can get to the top, enjoy the benefits of lovely views, fresh air (that has been known to come in the form of a gale), have a nice meal at The White House pub and still avoid Yorkshire altogether!

So, I leave civilization and up we go. Even though the bike is electric I still have to pedal. If you stop pedalling the motor cuts out. Shortly after that, due to the effects of gravity, the bike would come to a stop and I would fall off sideways. Don’t assume that there’s no effort involved, there is, and by the time I’ve reached the pub at the top my thighs are really burning, and that’s with the bike in its lowest gear part of the time. It’s taken about twenty-five minutes. That is pathetic to anybody who is young, fit and has decent equipment (legs) but for me it’s an achievement.

A couple of hours later, when the dizziness has moderated, I have the choice of zooming down the hill again or doing some pottering.

Just past the pub I can turn left in front of Blackstone Edge Reservoir and travel the gravel service roads that connect several hill-top reservoirs. The views are spectacular, not least because when you’re on the crest of a hill the valley below is hidden. In other words we can look across to distant hillsides as if nothing man­-made exists. I can imagine our forebears travelling the moors in magnificent isolation. Straw-coloured tussocky grass shimmers in the wind, a blanket warming centuries-old peat. You have to mentally block out the electricity pylons though. Boy, does man make such a mess of things. 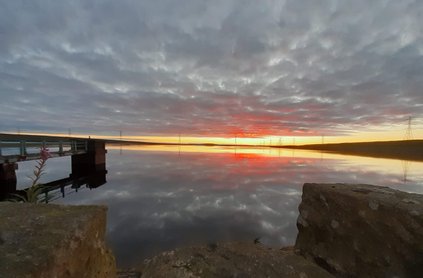 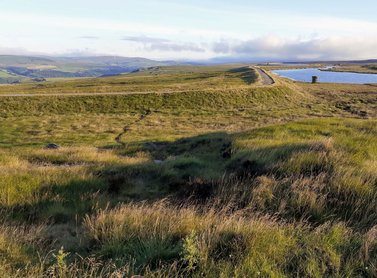 Across the moors - magic isolation

If we do look into the valley far below we can see the last remaining patches of green. I'm trying to make the most of it because they will soon be buried under concrete.