In the newsagent a while ago, a headline in a women’s magazine caught my eye……

'Do you comfort eat? It could be down to your cycle'

That was enough, I didn't read any more and sold my bike.

You can't be too careful, I thought – temptation, get rid!

I was a bit rash really, I missed the bike. A year or two later I was still comfort eating but now not exercising! There was little mirth at the size of my girth, so I’m having another go on two wheels.

Yes, I’m happy to be enjoying biking again, lucky to have a second chance doing something I used to enjoy so much. Thanks to Columbanus, my battery-powered bike (bat bike!?) I am once again a spring chicken on wheels. (Or cock of the north, or Doodle-do of the dales)

Pre the electric era I used to cycle quite a lot. Often ten miles per day, sometimes thirty or so. Usually early in the morning at first light, any time from 4.00 AM. Silent, me time. Not quite silent, because I was huffing and puffing between the hedgerows, sounding like one of Fred Dibnah's traction engines on the way to a rural rally. In the depths of rural France I’d just set off on tiny country roads and see where they led. I operated in kilometres on the continent because it sounded further and on downhill stretches I could get into double figures Kph!

I’d come across small villages or farms, silent and apparently lifeless, save for a snoozing dog. Sometimes a large ivy-clad country house with window shutters to fend off summer heat. Occasionally a chateau with moat and stables surrounded by woodland and accessed by a pale, tree-lined drive. Magical rides when I’d never know what was next. I was confident that no matter how far I went or how lost I got, I’d get back.

One time, in a place called Genelard, a small commune in Burgundy, I discovered a four-kilometre circuit which I used to circumnavigate three times. Travelling at what I thought a respectable pace, I was passed one day by a group of six leather-skinned old men. They must have been eighty if they were a day! All were lean, helmeted and Lycra-clad. A gay kaleidoscope of yellows, blues and reds. Some sported orthopaedic braces on knees or elbows. I was given a series of ‘bonjours’ as they whipped past in a cloud of ancient after-shave and liniment. Had I been competitive I could have put on a spurt and re-passed them leaving them in a noxious cloud of fags and red wine. It would have been a heck of an effort though which would have seen me spent for the day – or longer. In the end I decided to remain at comfortable cruising speed.

We all take things for granted, but we shouldn’t. We could do with an early warning system that reminds us to enjoy the moment. Don’t take ‘now’ for granted because ‘now’ is all we have to look back on. We need to look back and say wow, ‘now’ was good. Then we can get on with making some more memories for tomorrow.

I’m creating memories through walking and biking. And I’m actually looking where I’m going, seeing my home town and surroundings (of some 60 years) properly for the first time. It’s all too easy to scoot past things without looking and wondering. For example, the Lake I walk and ride round is called Hollingworth. Until I took note I had no idea that Captain Webb practiced here. Remember? He was the first person to swim the English Channel back in 1875. The Channel is some 300 miles distant from ‘our’ Lake. It’s also bloody cold, like The Channel. Funnily enough Captain Webb was born in Dawley, Shropshire. We lived near there for a while! Strange world eh? 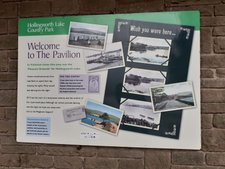 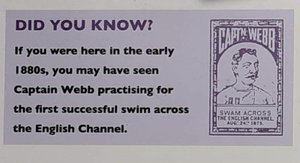 He had an interesting time of it. Have a look here.

There’s no right or wrong way to experience things, but at this point in my journey I’m dawdling. More accurately it’s a mixture of cantering and dawdling. In other words when something of potential interest comes up I ‘come down off the canter’ and dawdle. Sometimes it’s a bit of an effort to get back to the canter again.

Early morning there is a mixture of Lycra-clad beauties and old gits, like me. I consider myself to be at the second awkward age. The first is adolescence when gangly limbs and spots are the problem, this latter one causes more fundamental difficulties such as whether I can get my leg over the crossbar without lying the bike on its side. Or gazing out over the magnificent sun-dappled moors wondering whether I’ve taken my 75mg Aspirin.

People jog to get fit. Most seem wrapped in an electronic world, focussed solely (solely!! foot, jogging!! – get it??) on the next step. Everything else is bypassed. Journey’s end, their kitchen. Happy to be quad-stretching and sweaty after their exertion while the world beyond rolls on. Unnoticed by our jogger, the birds sing, the foxes screech and Captain Webb trains.

Mind you, not even an e-bike can get the better of a British winter. Yesterday it was barely above freezing and slippery under foot, today it’s 4 degrees and there’s horizontal sleet whipping across at 30 mph. Conditions truly the enemy of the cyclist. These are the days I walk instead. I can skip from bus shelter to tree to doorway like Inspector Clouseau sneaking after his chief suspect through Parisian Streets. Not now Cato!!