No. 4 from The Howgill Fells

One thing about being out in the sticks is that you focus on nature. You notice things because there are so few man-made fripperies to spoil things.

Here in the open, we are imposters in a worldly production, a play mankind could never hope to create. Out here, the magic of nature is all there is. Apart from a fat bloke with his dog.

Turn right, through a gate, up and over a small hillock and we come across Paradise Tarn.

Today is not a cycle day, at least pre-sunrise. It’s -4 and my exposed extremities are too vulnerable. So, I walk with the hound. For an hour or more, it will be our own private world. But look close and there is activity aplenty.

White mist is rolling off a distant hilltop and down a valley. As I crest a rise a pair of hares are startled and dash off across the frosty field. One thing for sure, it’s mighty cold. Yesterday’s south-easterly has become a nor’easter and strengthened. It’s a blast from the fjords and it really is very cold. We need the sun to work its magic, but that’s a good half hour away. Even then progress will be slow. I’m dressed in multiple layers of clothing. Dressed to the 12s in fact, 9s isn’t enough.

Below is the tarn. A hundred yards across perhaps, where a pair of swans and a few Canada geese trawl the lake in splendid isolation. The dog dashes after a rabbit. No chance there. For the dog that is. There are no sheep in the field surrounding the tarn so it’s safe for the dog to run. We are acutely aware of the vulnerability of the lambs and the farmers’ livelihoods. It’s hard enough up here without people like me interfering. 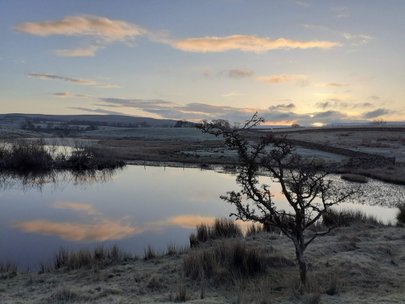 An icy morning for the tarn

This tarn (or corrie) is shallow and it’s hard to imagine a large glacier forming here. In fact it didn’t! Tarn in this instance is being used as a generic term for a lake. Tarn may be derived from the old Norse word tjörn meaning pond. Paradise Pond doesn’t have quite the same ring to it.

Here at Paradise Tarn, the land is raised somewhat on three sides, highest at the back, so the basic, classic shape of a glacial is evident, but further investigation reveals that this little lake had nothing to do with glaciation. It’s basically a large boggy puddle, though a very attractive one in a stunning setting.

But let’s digress a moment because I find glacial tarns interesting. Snow collects in a hollow and compacts to ice. The whole lot rotates backwards and ice ‘flows’ out at the front. Imagine sliding down a chair and slipping out feet first. What’s left when the ice melts is a lake, sealed at the front by the moraine eroded, then deposited, by the glacier.  Move on ten thousand years and we have a sanctuary for the birds and a place for the dog and me to frolic. Not frolic perhaps, today it’s too cold – shuffle. In fact, today feels like classic glacier-forming weather. 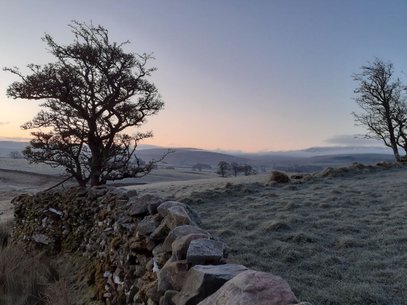 Mist rolling off the hills 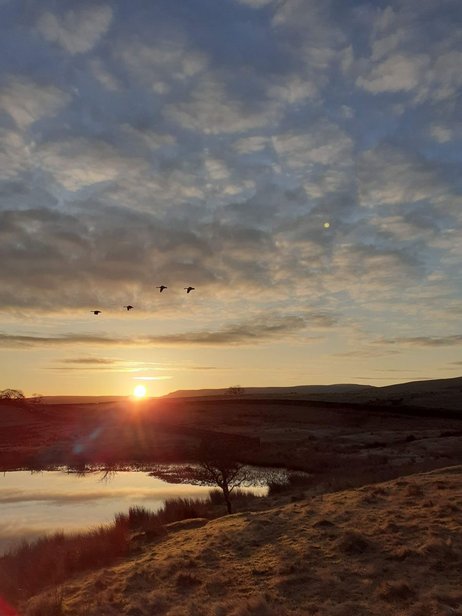 As the sun creeps up, wildlife cranks into action. Four geese circle the tarn three times before landing on the water. It’s a magical sight as they fly before a young sun. Perhaps they’re working up an appetite for breakfast.

Later in the day, the wind has dropped and it’s warmed up so the bike and I are reacquainted. We set off on a mystery tour. I pass the spot, marked by scorched earth, where Mr Ratty had his meltdown and I find myself by a lovely old stone bridge over a beck. Up from the beck’s bank, over a wall stand a pair of houses. Typical Cumbrian, solid, rugged, light-coloured stone. Same stone as the bridge, the wall and the scree in the beck. There’s a cleanliness about it all, any blemish likely to be lichen rather than the sooty smears typical of my home town. Nothing really wrong with sooty smears mind, they are evidence of lives lived and hard graft (and slave-like working conditions at times). The unsullied stone hereabouts has not been interfered with by us, so it’s unspoiled. If it wasn’t so knobbly, in the words of my Granny, you could eat your dinner off it.

Walking towards me along the bank is a man. Not a local, there was no purpose to his walk. Rather like me, he was just pottering, a guy taking it all in.

‘Been coming twelve years,’ he says, after I’ve interrupted his solitude. ‘We love it.’

I’m grunting a bit because I’m trying to open the little zip-up bag on my crossbar but my stomach’s getting in the way. Oh, the difficulties of a fuller figure. He watches me with some amusement, then tells me he stays in the same holiday house each time he comes, a bungalow in the village. From South Manchester, he comes for the peace and quiet. And there’s plenty of that. He didn’t seem concerned that a green blob on a bike was sharing his enthusiasm for the area. He could have reacted to me with disdain. Me being an elite athlete after all, dressed for a major cycling tour, utterly out of place in the rugged splendour of Cumbria. But no, he was a simple man able to ignore the bling and seek out the beauty around. It’s good to share positive things with a nice man. I like to think that underneath the flobber and greenery, I’m an ordinary chap too.

His wife had suffered a stroke a couple of years ago and was rather immobile, though improving slowly. Fortunately, their local accommodation was suitable for her difficulties. He told me wistfully that they had managed a short walk together yesterday. But today he was out on his own. There was a sub-text here, namely that he would have loved to have been walking with his wife. I could see he wished for fitter, younger days.

Then a quad bike rumbled by towing a small trailer which contained sacks of animal feed. It was followed by a tractor with a round of hay on a spike on the front. Rush hour in Ravenstonedale.

The man and I bid farewell and we returned to our own peaceful paths. 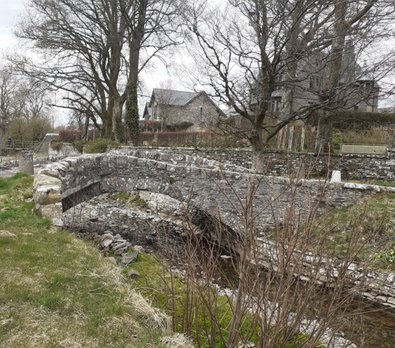