No. 6 from The Howgill Fells

Pendragon castle is described as a romantic ruin.

(A similar description was levelled at me after I bought my dear wife some flowers for her birthday.)

The castle is slowly crumbling into the landscape of the stunning River Eden valley.

Neither I nor the castle have been ruins forever, both of us were quite impressive in our heydays. I am in the throes of a first physical rebuild while, over the centuries, the castle has had a number of incarnations. My origins have been pretty much authenticated, the castle’s less so….

According to Visit Cumbria:

'Pendragon Castle is reputed to have been founded by Uther Pendragon, the father of King Arthur. According to legend, Uther Pendragon and a hundred of his men were killed here when the Saxon invaders poisoned the well. There are also claims that the Romans built at least a temporary for here, along the road between their forts at Brough and Bainbridge. But (apart from legend and supposition), there is no real evidence that there was any building here before the Normans built their castle in the 12th Century.’

(Mind you, ‘Visit Cumbria’ has made some assertions about the Ulverston Canal, which are questionable. I’ll tell you about them in due course).

But legends are good, not least for tourism. Today a porky green blob sets out to visit the castle while testing himself and his machine. It’s a hilly neighbourhood you see and I need to see if the combination of man and bike can cope. If one half fails, the twain are marooned. The human half is the more likely weak link, but we’ll see. 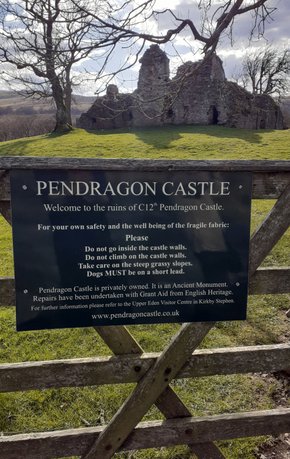 Major roads often follow valley floors or hug hillsides. These larger highways are linked by a series of single track lanes with passing places, which tend to wind their way up and over crests. They are about eight feet wide, asphalt with moorland grass either side, sometimes bordered by rudimentary drainage ditches. From a distance they look like dark grey ribbons laid on the hills, fabulous cycling territory, apart from the sometimes precipitous slopes. This is where the test comes in. Previously, I’ve only come across one hill where I’ve ground to a halt because it was too steep. I took a ‘private, no entry’ road thinking it would make a quick short cut, but I got my just deserts when I had to turn round! Served me right. 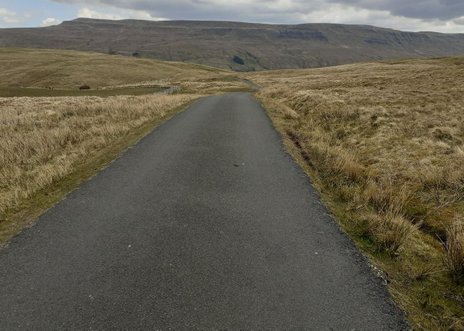 It's down there in the valley, about a mile

From home base to Pendragon Castle is about five miles but there’s a few hundred feet of climbs and descents. Total ten miles with lots of slopes. Battery and man need to do the whole ten miles because running out of juice with a mile to go could be a real nuisance. The bike is 25 kilos and shoving it up a steep hill would not be much fun.

The first three miles are on wider roads, the last two on a twisty, hilly ‘ribbon’ road. There are a number of steep battery-sapping inclines before I get to the highest point, about a mile from the castle. I pause at the top to have a drink (water!). I’ve just passed a parked car. It’s one I saw two days ago in the same spot. As I look back, it’s just below me, 30 yards off the road. There’s really nothing else up here except sheep and birds and I wonder if everything is OK.

In the true public-spirited attitude that has served mankind through the ages I don’t bother checking and set off down the hill. It’s at least a mile, and some of it pretty steep. The only danger on the way down is driving into a ditch or pile of rocks, which would be pretty stupid, and I wouldn’t tell you about it if I did.

Part way down is a parking spot. In there is a rather smart estate car, the owner of which is trying to pitch some sort of tent. He waves as I zoom past. Down and down the twisty road, ever more mindful that I have to come back up. Near the bottom I pass a house that used to be a farm - not the first such arrangement, lots of farms and attendant buildings are now homes to non-farming incomers.

The castle is at the junction of my narrow ribbon (called Tommy Road) and the ‘B’ road which connects Kirkby Stephen to all points south, including Hawes, and Wensleydale cheese. (I’ll tell you about that later) The bigger road I’ve arrived at is one of those with an unmissable blue sign at it’s start, ‘25 motorcyclists have been seriously injured on this road in the last 2 years’. Pretty cheerful welcome! 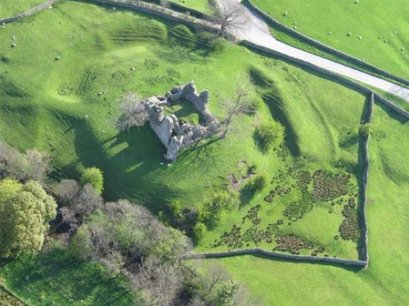 The castle is a ruin, it won’t be keeping Uther or Arthur dry without a new roof, at least. But it’s absolutely charming and deserted. It’s in a private field, a grazing habitat, and as such is closed off by a sprung five-bar gate.

I’m not only worried about my battery running out, I’m also bothered about having the bike pinched, so I decide to take it through the gate and hide it behind the wall, away from thieving eyes. Actually, it didn’t go quite as smoothly as that. The bike is quite weighty and the spring on the gate is very strong. The gateway itself is rutted from tractors going in and out (and dragons??).

At this point I’m glad there’s nobody else about because I make a complete mess of the following three minutes.

I have to wheel my bike through while holding the gate open. Halfway through, my wheels get caught in a deep tractor rut and there follows a slow motion shambles. I fall over end up in the mud trapped underneath my bike. Then the gate creaks closed on its heavy spring, in turn trapping both me and the bike. I’m lying on my back like a corpulent green beetle stuck under a scrap heap. If someone had choreographed this as some sort of comedic stunt, it wouldn’t have worked. Too contrived, utterly unrealistic. Nobody could possibly make such a balls-up of going through a gate. Took me a while to extricate myself I can tell you.

I bet Uther didn’t have this trouble.

The castle is charming.

As wrecks go, it’s a good one.

(Can you tell I’m being a bit peevish because of my battle with the gate.)

From an overhead photo you can see what looks like a grass moat. Local legend says that Uther tried, unsuccessfully, to alter the course of the River Eden to fill the moat, giving rise to the well-known couplet (locally anyway):

Let Uther Pendragon do what he can,

Eden will run where Eden ran.