No. 7 from The Howgill Fells

Drifting through this lovely landscape is a whiff of legend-based commercialism.

Just across the road from Pendragon Castle is Pendragon View. Without the legend that is King Arthur it would be ‘Pile of Stones View’. I’m half expecting to see Pendragon Ice Creams drive up or Uther’s Kebabs. Much more of this and we’ll have a Loch Ness Monster situation – a contrived drip feed of nonsense that’s kept tourists coming for about ninety years. It’s a good job Nessie is long-lived or a whole industry would be furloughed.

The castle is open to the elements and looks rather rickety. Visitors can clamber where they will, there are no restrictions. Actually, that is not true. I’d missed a perfectly good warning notice posted on the gate. Probably because I was lying underneath it. Anyhow, as I cavort around the mossy stones, a foot wrong here or a slip there could result in injury. The Health and Safety guidelines were put together by Uther, back in the days when his subjects were expendable. If you’re lying injured you can take your mind off things by marvelling at the lovely small blue flowers growing from the cracks in the walls, nature’s nod of sympathy to the people who lived a brutal existence in the castle. The flowers are possibly campanula, though I’m not well up on ancient flora.

From the ramparts there are stunning views over the River Eden valley and up the towering fells. It is a magical place. I can imagine standards flying from the towers as horses clip-clop along the valley floor, returning home from massacring somebody. 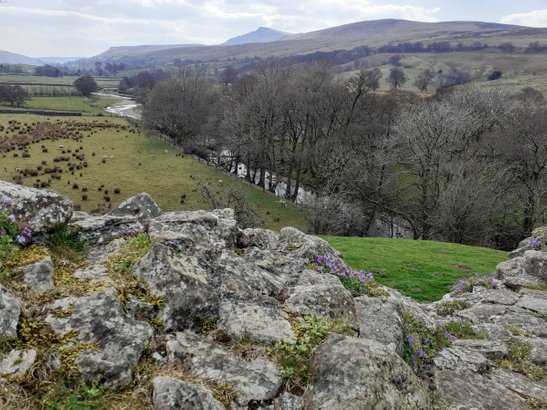 Various rooms are evident though it’s not clear what was what. The exterior walls are thick and solid and though the structure looks quite small from a distance, it’s evident that constructing it would have been tough work. Close up it’s pretty imposing. I think maybe it looks small because of the vast landscape it’s set in.

Not sure why, but as I look out over the river, my mate John comes into my thoughts. The river would have been a means of defence and a source of nourishment. I think of the ‘Responsibly sourced Fish’ slogan that you see on packets these days. Well, it doesn’t come any more responsible than my mate because he never catches anything. I can see him sitting on the riverbank, laughing and enjoying the scenery. I’m sharing a pleasant day with an absent friend. 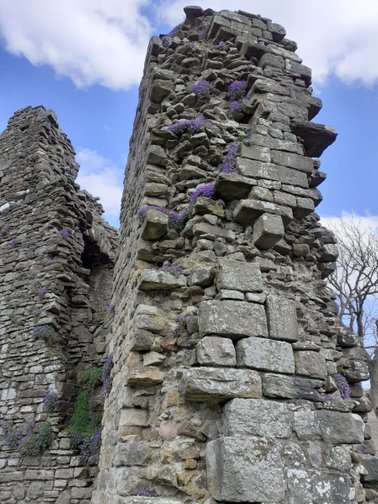 Time to go. I prop the gate open with a big log, then take my bike out. Learning on the job you see.

The battery monitor shows plenty of charge as I begin my ascent. It does look quite a long way up as the ribbon of road disappears over a distant crest. It will look a very long way if have a ‘mechanical incident’ but I’m buzzing along quite nicely. Don’t think I’m doing no work, the bike is not self-driven, it needs rider input – ‘electrically assisted’ is the term. I have to put effort in, especially on the very steep bits, so I’m ready for a breather about two-thirds of the way up. The man with the posh car has had a rethink and taken his tent across the road to a flat bit of grass, presumably where there’s more room to manipulate poles and canvas. I ask politely if he’s staying in his tent overnight.

I sense that things are not progressing as anticipated. Then suddenly, a wicked little gust of wind and the canvas flips up in the air like a discarded paper bag. While trying to catch it he releases his hold on the poles which collapse in a heap with a clang. As I leave he’s underneath the canvas cursing his wife who is, ‘not helping at all.’ I set off again chortling, which is not ideal for big uphill breaths. But Columbanus does me proud and we reach the top. Two bars out of four showing on the battery monitor, all good so far. 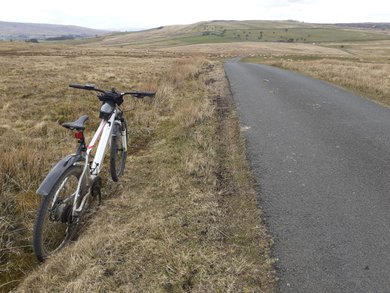 The car is still there. Car number two (of two) in this enormous landscape. No sign of life. I think I’d better take a peek so cycle over the sheep-cropped grass to investigate. There’s a chap lying on a sleeping bag. His head is in the boot with his feet on the flattened passenger seat. He looks very comfy actually, but he’s worryingly still. What he thought of my ruddy, blue-helmeted face pressed up against his window when he opened his eyes I’m not sure, but he certainly gave me quite a start when he sat up. He was staring at me with a mixture of terror and panic. He wound the window down.

‘Right.’ He replied, blinking wildly. ‘Thank you. But if I’d been dead it wouldn’t have mattered would it?’ He raised his eyebrows. I had to conceded he had a point.

‘Actually,’ he continued, ‘I’ve just got back from the pub where I had a couple of pints and a big meal. That was preceded by a long walk. Consequently, I was taking an afternoon nap.’

After he’d had a monster yawn, we actually had quite a decent conversation. Nice chap he was, from Newcastle, who had been to the same spot a few times before. One of his favourites he told me, and I could see why.

I decided it was also my equal favourite Cumbrian spot, alongside the one where I saw the lady on the suped-up disability scooter. I suspect I may find other equal favourite spots. It’s the top-of-the-worldness of it, the silence, the vast skies and the uninterrupted views, at least till the next range of hills, which can be ten / twenty miles distant. Around me, just the birdsong and if there’s no wind, the gentle sound of the sheep chomping on the grass, and a man battling with a misbehaving tent and another trying to get a bit of kip.

The bike does me proud and we get home with a bit of charge left.

That’s been a great ride.