Permafrost is slowly releasing its grip. The ice-sheet is drifting slowly north, crackling its way towards Scotland.

Here in Lancashire, we are left with the soggy remnants of winter. Last year’s unpruned plants sit grey and bedraggled, like one of my culinary creations dumped in the garden by a discerning dinner guest.

Winter can be the enemy of the cyclist, particularly one with dodgy feet. Despite multi-layers of socks, the cold still penetrates. I’ve tried socks from the world over in an attempt to keep warm. The best I found were from Germany. But since Brexit they are ‘unavailable’. My tootsies are a victim of Britain’s go-it-alone revolution. But, a silver lining! I’ve found a replacement supplier who offers British made, multi-coloured, knee length ‘ski’ socks. If nothing else they look very smart. I haven’t tried them out in anger yet because it’s chucking it down and my e-bike is unsuited to wet conditions.

This raises two questions. Should not a bicycle be sufficiently water-resistant to be ridden in the rain? Do I want to ride in the rain? The answer to the second one is no, so question one is irrelevant.

Actually, I did by a pair of cycling overshoes, Velcro-fastened, that you slip over your shoes. They supposedly keep out the damp and the cold. By the time I’d insulated myself with multi-layers of weatherproof clothing it was a real struggle to even bend down. And as I finally made it, the sheer physical effort precipitated an enormous cramp in my Taylor’s muscle. Also called the Sartorius muscle, it’s a big thing that runs down the inner thigh and is very painful when cramped. Before I’d even got going I was hobbling around the garage cursing sub-standard equipment (legs). Most people get cramps following exercise. I think it just demonstrates my extraordinary level of fitness that the slightest movement can have such calamitous effects.

In winter I often return from my early morning trundle to sit with my feet on a microwaved bean bag while eating my breakfast sardines. My friend and neighbour turns his nose up at my choice of morning fuel. But what’s the difference between fish at lunch or fish in the morning?

Yes, it’s ‘early doors’ when I digest my shortcomings and evaluate my (lack of) progress. As my poor old body realigns itself (and to stretch the fishy metaphor) I trawl over that morning’s achievements (or lack of) and ponder how I could do it better. Buy a motorcycle perhaps? Or a car?

First thing in the morning you can get away with things. Remember my encounter with my neighbour’s hedge? That was accomplished (I use that word advisedly) under cover of darkness while my senior neighbours slumbered on. Had the same incident occurred in sight of a busload of locals I may have given up cycling there and then. The loss of face may have been too much to bear.

I also see some peculiar things first thing. I met an acquaintance one morning, a man I usually see during the afternoon, when he's actually awake. He’s not an early morning person at all. When I encountered him he grumbled that his alarm had gone off ‘unexpectedly’ and he was unable to get back to sleep. Watching them shuffle and mutter their way down the path, I judged it would be a while before I saw them again at this time.

One day, I discovered somebody camping on the local bowling green. A tent, with attendant paraphernalia stood in magnificent isolation right in the middle of the green. I posted a photo on the local website but nobody responded. A fabrication, people would have thought. But no, somebody had seen a patch of neatly mown grass and ‘gone for it’.

The weather here in the Pennine foothills can be unpredictable. That’s being polite. I often set off in the dark and can see the stars. This indicates that precipitation is unlikely. At least imminently. But squally showers can sneak up and in the blink of an eye and you suddenly find yourself riding into gusty sleet. Or is that sleety gusts? Whichever, neither is very pleasant. And it’s the feet that take the brunt. Other extremities suffer, but not to the same degree. My face is usually red and blotchy, but weather-induced or wine-induced, I'm not certain. I need to do more research. My fingers get chilled but I wear two pairs of gloves. A pair of cycling ones beneath a double-layered thermo pair. I used to have some silky inners too but the mice in the garage ate them.

Incidentally, the cycling gloves have special fingertip pads that allow me to operate my touch-screen phone without taking them off. I’ve not used this feature yet. In fact, the only occasion I can envisage using it is if I suffer brake failure on my 3-mile descent, at which point I may need to call an ambulance for the inevitable crash.

Early morning winter cycling can be a bit of a gamble. Columbanus is equipped with a pretty good front light, which frankly is essential to avoid potholes. I sometimes take a slightly unnerving route that includes a tree-lined stretch of The Rochdale Canal. Wet leaves on a narrow, bitumen towpath can be the cyclist’s enemy. My light illuminates a bright patch right in front but I’m aware that a couple of feet to my left is the cold (sometimes frozen) canal. It’s just a dark void and not a place I want to go. Every now and then the water reflects a wink of light from my headlight, reminding me that danger lurks. An added problem is that the carpet of leaves can hide stones or bits of rubble, or ruts or potholes. The darkest stretch is just over a mile so caution is exercised. 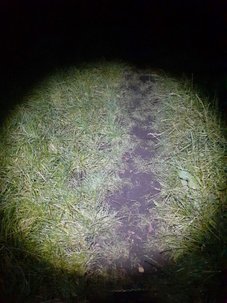 Last time I went this route I nearly met a sticky end for another reason. After the canal stretch I turn left up a hill. The road is quite narrow but busy with early-morning commuters. As I climb, a van is passing me and there’s another coming the other way. There’s not much spare room and I’m concentrating hard when a dog, being walked along the footpath, takes exception to me, lunges on its lead and nips my trouser leg. Very alarming, and I’m not sure how I didn’t swerve into the path of the van. I called the dog-owner an unpleasant name that rhymed with bat. But, as is the convention these days, rather than apologising, she went on the attack and blamed me for startling her dog.

Spurred on by the promise of sardines, I stow my lack of dignity in my (children’s) ruck sack and speed off up the hill like a wobbly green blob. My battery-assisted buttocks leave the woman and her murderous mutt in the dust. Yes, children’s ruck sack. It looked bigger in the advert photo. But its copious enough for my binoculars, plus spare inner tube and an emergency lump of cheddar.

There are challenges to dawn cycle rides, but as the night relents, I realize why I make the early morning effort....

NEXT - a series of tales from Cumbria, The Lakes and The Yorkshire Dales.