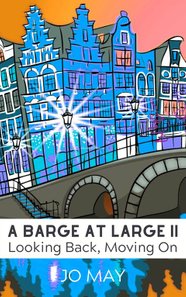 I love it when you find an author that writes really great stories and can describe simple things with humility,sarcasm and truth however, I don’t like it when I finish what they’ve written......

'I really enjoyed this book, and the narrowboat book before it as well. In the last 18 years I have cruised most of the English and Welsh waterways going through 3 boats, two wives and a dog (I miss the dog) so I can identify with Jo's experiences. His sense of humour makes the book as does his writing style which cuts to the chase and avoids the problem of many travelogue's of going into too much detail about each place and therefore becoming boring. Some reviews have criticised the grammar and odd spelling mistake but come on get a life! I have not cruised in Europe (and now I am probably too old) but this part was also really interesting. His clashes with officialdom and those pompous prats that regularly turn up are also well told. I've just bought the third book so hope for more of the same.'

A Barge at Large II continues Jo and Jan May's European adventure on their old Dutch Barge, Vrouwe Johanna. Using skills learned as a baker in years gone by, Jo transformed a neglected, scruffy boat into something fit to live on, at least for a couple with low expectations.

'I've just given up smoking - ciggies anyway. I'm puffing away on an E-cig (cherry flavour allegedly, though it tastes like a budget hand-cleaner) but it's a month since I've had tobacco. I might look a bit of a plonker but it's a step in the right direction. It's cheaper too so with diesel to buy for the summer, giving up the fags has been a boost to the coughers!!

See what I did there – with a bit of innocent word-play I have turned a paragraph with a horrible subject into something worthy of a moderate hack. (Oh, did it again!).'

For two years Jo and Jan cut their teeth in Holland, re-modelling their boat then learning to handle it on large lakes and quiet canals (where they couldn't do too much damage) before moving on to rearrange the infrastructure of the French waterways. According to their mate Dave, they finally reach the 'not totally incompetent' level where other boaters 'at least had half a chance of returning to port undamaged'. They eventually run out of people to annoy in France and move on to Belgium where they find a new collection of victims.

Incorporating further boating tales, a short road trip and a shambolic introduction to camper-vanning, this episode sees them expand their horizons and begin an uncoordinated search for a life after boating.

Jo joined an amazing project which involved the moving of France's last remaining wooden barge across Burgundy. Being clueless in any other area, Jo was volunteered press officer. During the 5-day trip he sent back daily reports which were published on local and regional web sites. Here is a brief extract..........

'Day three saw us depart Molinet at 8.15am, much to the disgust of those still eating breakfast, in order to arrive in Digoin Port at 9.00 am and a rendezvous with the deputy mayor of Digoin, Mme. Nicole Georges. We were delighted to welcome her aboard with her colleague and she showed great enthusiasm for Project Aster wishing us well both for the remainder of our trip and for the future of the project. Fortunately she was so engrossed in her short trip that, when asked to sit down to avoid injury on a low bridge, she didn't notice that she was sitting on a pair of underpants. They had been washed (by a nameless member of the crew) and were drying on the chair in the sun. Actually, I admit, they were mine. Although the practice may be quite common in Town Halls around the world, this is the first time that I have had a Deputy Mayor sit on my underpants.'