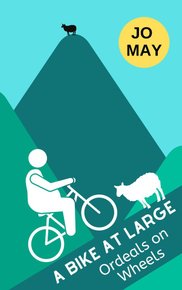 When I was overtaken by a jogger on a borrowed mountain bike, I knew it was time for drastic action.

Welcome to the world of a man in his 60s and his new e-bike.

My first injury occurred within one foot! Setting off for my first practice ride round a car park, I misjudged the width of the handlebars and scraped my hand on the cycle shop’s stone wall.

Prophetic words indeed. Eighteen hours later I was embedded in my neighbours hedge due to a clothing malfunction. Fortunately, before setting out I’d put my ego and self-esteem in the top drawer in the kitchen.

With the emergency ambulance on speed-dial, I climb a steep learning curve on a series of mini adventures throughout the north of England, mercifully with a diminishing distance to injury ratio.

By calling my e-bike a ‘Lifestyle Investment’, it took my wife’s mind off the cost. At the time she needed some new slippers, so it was a sensitive issue. Someone asked whether I was searching for eternal youth? ‘Not really,’ I replied, ‘more trying to keep out of my eternal hole in the ground. A pressing matter upon which I feel I must act swiftly.’

Fuelled by red wine and optimism………

Yes, that first practice cycle for five years was a disappointing affair. I’d borrowed a mountain bike from my stepdaughter. It's a black, uncomfortable thing that doesn't go very fast despite having lots of gears. By way of example, while cycling a local canal towpath, negotiating a slight incline (and I mean slight) I was overtaken by a jogger. Yes, a jogger. Not a runner, a jogger. To compound the ignominy, our jogger, to put it tactfully, was carrying a little weight. Oh dear……..

Rather embarrassed, I realized I needed help. I love being out and about so have to find a way to explore without compromising my self-esteem. On more than one occasion, as the old legs have temporarily given up, I've had to stop and pretend to take a photo of something in a hedge. I decided an e-bike was the answer.

I’m a chap of 60. As you can see from various photos I have dutifully cultivated a haggard exterior. If you think what's on view is bad, the rest is even more knackered! I have the odd self-induced health issue, dodgy arteries mainly. Most people ‘of an age’ have something to fret about so perhaps you’ll empathize. Anyhow enough of that.......

Skip forward six weeks and I’ve got a bike. It’s a Lectro Peak. A brand nobody has heard of, apart from the bloke who sticks go-faster decals on in Korea. It has one rechargeable battery and two engines. The main engine is in the back wheel and is powered by the battery. The second is a double piston arrangement attached to my buttocks. The latter is a vintage model and a touch creaky, in need of a re-bore if the truth be known. It’s seen a lot of service and has been propelling a portly top half around for rather too long. Whatever, this new beast has to be better than being bettered by a porky jogger.

In the book, I chronicle my attempts to behave like an athlete. My inadequacies are laid bare in all their dysfunctional glory. While compiling this compendium my memory coughed up some long-forgotten snippets from cycling days gone by. On one occasion I cycled straight into a large hole in the ground, part of a road-improvement scheme on a highway in Belgium. I hadn’t seen the hole because I was hurtling along, head down, 200-metres from the finish line and glory in the Tour de France. I was in that state of Nirvana achieved by an elite athlete where man and machine are lost in a subconscious other world....... I'll tell you about all that in due course!

Jan and I spend some time in The Howgill Fells where our younger family has moved to begin a new life. A wonderful place it is too. There's an introduction here.

My bike Columbanus? Why? Well, he's the Patron Saint of motorcylists. I have a cycle with a motor so it's near enough. Plus it sounds not unlike numb anus which sort of sums it up!