Blood Bikes and a Wuffler 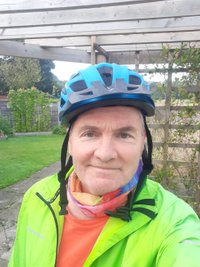 What's that gaily-coloured thing round my neck I hear you ask.

That is a wuffler. I bought it the other day. I am now officially a trendy (young?) thing.

No, I’d never heard the word before either. A bit of research sort of cleared the matter up, though there were discrepancies. For example, those familiar with farming may know that a wuffler is a machine for turning and airing hay. Also called a hay tedder.

I remember our local farmer, Edgar Cropper (yes, that was genuinely his name!) tedding the hay in the field outside the house. Or wuffling it. Sounds good doesn’t it?

However, the wuffler I’m talking about here is a stretchy, circular neck gaiter, or a neck tube bandana, or a snood, or a neck scarf. They are also called a buff, a magic scarf or a wrag.

I’m going to call mine a wuffler because I like the name.

They are a very versatile piece of clothing and are a fashion accessory for trendy young things. They are gay and colourful and can be worn as head scarves, neckerchiefs, pirate caps, headbands, snood, beanies, foulards, saharianes, face masks, sports wrags, oh, and buff style. (Buff style??). Can I say gay and colourful? Too late.

I had to check up on one or two of those descriptions. A foulard is basically a scarf in French. Not the most attractive description because French ‘fou’ translates as mad. So fou-lard is mad fat! ‘Look, I’ve bought you a mad fat for your birthday’, sounds like a sure way to end up with a black eye. A sahariane is also a type of scarf. Though when I Googled it I was also shown images of a medium weight Italian tank! (That’s a metal thing used in the desert, not a stout fashion model.) I’m learning a whole new language here.

Have you noticed, the more trendy or more hip the offering, the more dour the expression? The latest perfumes are fronted by frozen-faced beauties accompanied by breathy commentary. It's the same in real life too, it's not just on TV where people look sultry and miserable. I pass teenagers, groups of two or three, faces like alabaster. I’m reluctant to smile or offer a verbal greeting for fear of ridicule or being accused of being a pervert. Smiling it seems is not cool. People only smile nowadays when they’re advertising panty pads or laxatives. Or promoting toothpaste with ridiculously pristine, practiced grins.

However, our smileless models do look hip, you have to give them that. Even when a wuffler is pulled up over the mouth to keep the frost out, they look cool. However, the eyes above are still unsmiling, sinister even. Like the glare of someone who’s just caught you shoplifting.

Wufflers are colourful things, all sorts of flowery cheerful designs. Perhaps they could market one with a smile printed on it for when they’re pulled up over the mouth. Or print them with something daft like, ‘I’ll have a large one thanks’. (Drink I’m referring to).

However, the other manifestation of a wuffler is where I come in - something purely functional. Namely, to keep an old git’s neck and assorted chins warm. And mouth if it’s pulled up. Stop the chilly air getting to sensitive teeth, the few that remain! I wore it for the first time the other day while riding my bike. I stopped for a drink of water and someone asked what was wrong with my neck. Frankly, that wasn’t the reaction I was hoping for. I need to get a snappy retort organised for when I’m asked.

‘It’s a wuffler’ isn’t enough is it? People might think I’m being rude.

I got mine (£5 - very reasonable!) from an unlikely source. It was a fund-raiser for ‘Blood Bikes’. You may not have even heard of them. Official name NABB (Nationwide Association of Blood Bikes). They have 36 regional teams of volunteer motorcyclists whose members transport blood, platelets, samples, surgical instruments, human donor milk and many other clinical products across the UK & Ireland to hospitals and other medical facilities. A friend of mine rides one and it was he that asked me to go along and support, which I was pleased to do.

Member groups are all staffed by unpaid volunteers who provide this service to the NHS, free of charge. NABB is a registered charity and funding for the association is by donation, like the Lifeboats I presume. They operate 24/7 and provide a vital service for me and you and our parents and our children.

And the bikers wear wufflers! At least my friend does. A good idea when roaring around in the chill weather. A pretty trendy-looking bit of gear actually.

Then I saw a photo on the internet. It was the aftermath of a collision between a car and a Blood Bike. The bike was a right old mess and the rider was taken to hospital by ambulance. It was an awful image and the irony is that the biker may have required the very products he was transporting – as a volunteer, for free!

I've subsequently heard that the guy 'only' suffered a broken ankle and heavy bruising. He'll be OK thank goodness.

At the fund-raiser I would have given them £5 straight off, but to get a wuffler and join the world of hip, was a definite bonus. We also had a go on the tombola and won a few high quality (if unrecognizable) bits and pieces. It was two days after our beloved Queen passed away so our small donations were just about the only reward the volunteers had that day. Business was not brisk. The good folk of the north had other things on their minds. For setting out stalls and displays the Blood Bikers got scant reward for that day’s efforts. I’ve hosted stalls at fairs and it’s soul-destroying when punters are sparse.

My visit got me thinking about articles of clothing or accessories for seniors. How about knee-warmers? Heated glasses? A walking stick with solar panels to keep your hand warm? A homing device for walking frames? Shoes that chime when you head the wrong way? Socks that put themselves on?

Perhaps similar things are already available. After all I’d never heard of wufflers had I?

Next time you see a fund-raiser for Blood Bikes, please pop along and help them out with a few quid.

If you see a yellow blob charging about on an e-bike wearing a wuffler, it's probably me. So no, there's nothing wrong with my neck. All you need to say is, 'wow, I wish I looked that cool'.