This a 'guest' article written by Dr. Rachel Nicoll.

- very interesting it is too.

There are a number or research articles written by her HERE 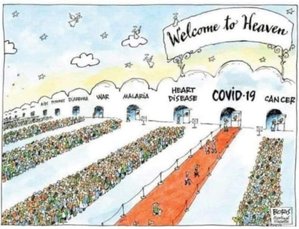 The developed world doesn’t just have to cope with a Covid pandemic – we also have a pandemic of chronic disease (defined as a condition which is persistent or otherwise long-lasting in its effects and for which there is no cure). A rough rule of thumb is to treat a condition as chronic if it lasts longer than three months; in 2012 this amounted to around 15 million sufferers in the U.K. and will be higher now. Examples of chronic conditions include Type 2 diabetes (T2D), obesity, cardiovascular disease, autoimmune conditions, dementia, lung disease, cancer… the list is endless.

Not only have many of these patients been effectively abandoned during the Covid crisis, with appointments cancelled, scans postponed and patients dying at home because they are discouraged from going to hospital, but if they do contract Covid they are likely to fare worse. All the chronic conditions listed above are Covid risk factors, making patients more susceptible to severe Covid and death. Furthermore, many of them are risk factors for other chronic conditions: T2D for cardiovascular disease, obesity for T2D, cardiovascular disease, cancer, dementia, musculoskeletal disorders, mental health disorders and many more.

Why is there still no cure for chronic diseases? By ‘cure’, I am not referring to medical management through drugs that have to be taken for the remainder of life, I mean a complete reversal of the disease, so that the patient can say, for example, that they no longer have Alzheimer’s disease or diabetes. With the trillions poured into medical research over the last several decades, we can be forgiven for asking what scientists have been doing all this time, as there seems to be very little to show for it in terms of reducing chronic disease. Furthermore, part of the definition of chronic disease includes the damning fact that it has no cure. So according to the current medical model, we apparently cannot prevent chronic disease and nor can we cure it; instead we must take ever-increasing numbers of drugs for the rest of our lives. In 2021, after decades of highly funded research, this is truly shocking. Not only is conventional medicine failing to cure chronic disease but the incidence of all chronic diseases is increasing dramatically.

Let me provide some examples:

Obesity
In the U.K., 2019 figures show that 28% of adults are obese and a further 36.2% are overweight. Obesity incidence is now occurring at considerably younger ages, with 2019 data showing that 10% of children aged 4-10 are obese and 21% at age 10-11. The incidence of obesity is rising rapidly: there were four times as many hospital admissions with a diagnosis of obesity in 2016/17 compared with 2009/10.

Diabetes
Ten per cent of all people aged over 40 in the UK are now living with a diagnosis of Type 2 diabetes; this amounts to 4.7 million of us, expected to reach 5.5 million by 2030. This compares to 1.4 million in 1996. The problem is global; the World Health Organisation (WHO) estimated that the number of people with diabetes rose from 108 million in 1980 to 422 million in 2014. Between 2000 and 2016, there was a 5% increase in premature mortality from diabetes.

Dementia
There are currently around 850,000 people with dementia in the U.K. but this is projected to reach 1.6 million people in the U.K. by 2040. The global number of people living with dementia more than doubled from 1990 to 2016, while in the U.S., deaths from AD have risen 145% between 2000 and 2017. The U.S. Centers for Disease Control (CDC) report that the number of people living with the disease doubles every five years beyond the age of 65. Most worryingly, those with early onset dementia have increased by 200% since 2013.

Cardiovascular disease
For some years cardiovascular disease mortality has been declining, despite increasing incidence of disease. However, in recent years, the rate of decline in CVD mortality has slowed in most developed countries, particularly at ages 35-74 years, and is now rising in 12 out of the 23 nations studied in 2017, including the U.K., the U.S. and Germany.

Autism
In the U.K., there was a sharp increase in the prevalence rates of autism in U.K. schools between 2010 and 2019. Autism currently affects 1–2% of the UK population – that is one per 100 children and two per 100 adults. According to the U.S. CDC, autism spectrum disorder (ASD) is the fastest growing developmental disability, affecting one in 59 children (1970s: one in 5000). Prevalence has increased 10-17% each year over the last several years. It has been described as an ‘autism tsunami’.

Prior to COVID-19, according to the Kings Fund, people with long-term conditions accounted for about 50% of all GP appointments, 64% of all outpatient appointments and over 70% of all inpatient bed days. Of course, we have far fewer GP appointments now as a result, so this figure for the last couple of years will be artificially lowered and will not represent the true needs of patients with chronic conditions.

The U.S. is so concerned about the ‘pandemic of chronic disease’ that the Agency for Healthcare Research and Quality (AHRQ) has recently undertaken a new initiative focusing on the increasing number of patients with multiple chronic conditions, estimated to affect more than 25% of Americans and consume 66% of US healthcare costs. The objective is to use evidence-based research to improve the care offered to these patients. It is notable that there is no objective to prevent or cure these multiple chronic diseases.

So what is going on? Even allowing for improved diagnostic techniques possibly increasing incidence rates, it is perfectly clear that there is no decline in incidence of these chronic diseases through provision of improved prevention and treatment. Chronic disease used to be something one accepted in old age, but this summer saw the publication of the 1970 British Cohort Study, which periodically tracks the lives of about 17,000 people. This showed that around one in three people in their late 40s has multiple chronic health issues.

Yet during the Second World War, we were apparently extremely healthy, despite rigorous food rationing. So what has changed over the last 70 years? Certainly not our genes, because although genes do evolve, they do not evolve to this extent in such a short period of time. Instead, we have introduced many more highly toxic chemicals into our food, our water and our air. We eat more, we eat more unhealthy foods and we have become ‘couch potatoes’.

Surely it is time for our Government and National Health Service to address the elephant in the room and acknowledge the extent to which our health is being damaged? Introducing a sugar tax and similar measures is just fiddling on the margins, playing lip service to improving health without actually tackling the issue head on. It is also time for the U.K. population to demand better from their government and healthcare providers? Without a complete reset of the medical model, we do not have ‘health care’, we have ‘disease care’.

Maybe it is also time to accept that the vast majority of medical research has not provided, and is not going to provide, a cure for chronic diseases. All it has achieved is improved patient ‘management’, usually drug-induced symptom suppression. This is a far cry from Sir William Osler’s precept: “One of the first duties of the physician is to educate the masses not to take medicine.”

While it is true that most of the medical research is carried out in the U.S., nevertheless, the U.K. does undertake some research of its own. Expenditure on research in 2018/19 amounted to just over £1.6 billion, while overall healthcare spending in 2019 was £225 billion. In 2011, 70% of the U.K. healthcare budget was spent on chronic disease; it is likely that by 2019 that percentage would have increased but even if it has not this means that around £160 billion is devoted to ‘managing’ chronic disease. So using the most recent figures available before distortion by Covid, we spend £1.6 billion on medical research, only a proportion of which relates to chronic disease, compared to the current chronic disease care costs of £160 billion, i.e., just 1%. Furthermore, evidence suggests that less than 1% of high quality medical research is translated into clinical practice, meaning that only 0.01% of the £1.6 billion spent on medical research could actually be impacting clinical practice (i.e., £160,000). Surely our research budget could be better spent?

As I was writing this article, a timely email arrived informing me about Public Health Collaboration, a group of doctors and other health professionals, headed by Dr. Aseem Malhotra, who have launched a rival to Public Health England (PHE) and its successor, the U.K. Health Security Agency, to help combat obesity, poor diet and medical misinformation. The founders claim that PHE has failed in its responsibilities to the public, while the NHS can no longer cope with the demands placed on it by chronic disease. They point out that the two major industries, food and pharmaceuticals, mislead for profit and are the major root of our healthcare crisis. Unhealthy food and toxic chemicals – I rest my case!