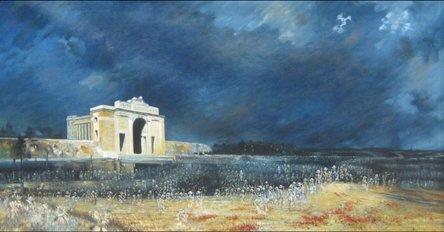 The Menen Gate, painted by Will Longstaff in 1927

The Menen Gate is a magnificent, iconic memorial to the First World War.

The poppy is the symbol of remembrance and hope for the future.

The countryside of Western Europe was a verdant, beautiful landscape, until the war came and the land was smashed and ravaged. Nothing grew in the bombed, blasted desolation of the battlefields of the First World War - except the poppy. A bright red beacon of hope that flourished where nothing else would grow.

It’s my wife’s favourite flower. For her too it’s symbolic, because it symbolizes her battle with the ravages of ill health. The poppy shone for her in some dark times.

I make no apology for including this poem:

Shortly after losing a friend in Ypres, a Canadian doctor, Lieutenant Colonel John McCrae was moved by the sight of the poppies and that inspiration led him to write the now famous poem, 'In Flanders Fields'.

In Flanders' fields the poppies blow
Between the crosses, row on row,
That mark our place: and in the sky
The larks, still bravely singing, fly
Scarce heard amid the guns below.

We are the dead. Short days ago
We lived, felt dawn, saw sunset glow,
Loved and were loved, and now we lie
In Flanders' fields.

Take up our quarrel with the foe;
To you from failing hands we throw
The torch; be yours to hold it high,
If ye break faith with us who die
We shall not sleep, though poppies grow
In Flanders' Fields.

The following line is asking us never to forget: ‘If ye break faith with us who die we shall not sleep,’

I remember those words when I stand within the Menen Gate. I’ve been a number of times and am always choked up by the extraordinary experience. More than Fifty Four Thousand soldiers are honoured here. Their names engraved on Portland Stone panels. They are British and Commonwealth soldiers whose bodies have never been found or were unable to be identified, so have no known grave – The Missing. They are a multi-national, multi-racial band of soldiers to be honoured and remembered forever. We need to let them sleep.

I have written an article specifically on the Menen Gate HERE.

The Menen Gate and the poppy, with whom it jointly symbolizes such heroism, are non-religious symbols of one war in civilization’s torrid history of conflict.

Over the years, the poppy has become the symbol of men and women throughout all conflicts.

The interesting history of the poppy and it's relationship to remembrance is covered HERE.

Recently, I was reminded of the impact military service has on people. I was in the company of a friend who is still battling her demons many years after her guns were silenced. No longer in the military, she is, in effect, in mourning. She mourns her former self. She remembers the person she was before horrors and dangers changed her forever. With her, there are times of lucidity and fun, but I saw the dark struggle too. I saw her take herself off, sometimes to a quiet corner to seek counsel, sometimes to the hills to be physically free. She is trying to resolve inner conflicts that flash back and keep flashing back. She has so many memories that are always just below the surface, brutally affecting her life.

My friend is right at the sharp end of the many not receiving enough compassion or help for a struggle that is absolutely no fault of her own. We seem ready to unreservedly send our compatriots into some horrendous situations to help make the world a safer place, but when they return, they get neither the thanks nor support they deserve. In many cases, the place in their mind to which they return is far from safe. Thank goodness for the money raised from the poppy appeal, but it really shouldn't be necessary. We should look after our heroes better, both those with physical and mental difficulties. They all deserve our help and compassion.

The poppy is a reminder of my friend, and my wife, and the millions of souls who have perished for us. It’s all too easy to hear the line, ‘died so we could be free’, and let it float over us and away. It has become so familiar, it’s worth is somehow diminished. The poppy remains defiant. The poppy won’t let us forget.

Where I live the ceremony is well-attended. Many hundreds come to pay their respects. Sadly, it’s been hijacked somewhat by religion. Sure, some people refer to themselves as Christians and a small proportion of them actually practice, but many are not religious, me for one, not any longer. I’ve seen too much in my life to believe that any benevolent deity is worthy of my worship. Of course, there is a place in our world for worship but the Remembrance Ceremony should not be a recruiting ground for the church. Ultimately, religion has caused more wars than it has prevented.

The ceremony should undoubtedly be an opportunity to the remember and honour those who have gone. It should also be a celebration of who these folk actually were, both collectively and individually. Perhaps we should hear more personal stories of our local heroes, more memories of the people who are really important at this time of remembrance. Once a year we gather in such numbers, let’s make the most of it for the people who really count.

The act of remembrance is non-religious, non-political - let’s keep it that way - poppies and all.

“Remembrance in the UK today is very different than it was 100 years ago. People take part whatever their political or religious beliefs. The poppy remains a humble, poignant symbol of Remembrance and hope.”