This is a tribute to Nurse Ivy Ellis, Midwife.

A star in my home town of Littleborough.

I recently wrote..... ‘Ivy Ellis was little short of a heroine to many local families. Roughly twenty years before the NHS was formed, she would have battled all weather to help expectant Mums, sometimes arriving on horse and cart. With little more than a few towels, warm water and a fire in the grate, many local folk made their entrance. Through one of her relatives we had access to her photograph album. Photos of some fifty babies over twenty years are displayed during this heritage celebration. Many of the names are familiar and some of the tots of yesteryear will be the forebears of today's generation.’

Below is a piece written (I believe) by her niece. It’s a fascinating snapshot of Littleborough’s history. The words in italics are my additions for clarification.

(Littleborough is a small town in East Lancashire in the foothills of the Pennines.)

Ivy qualified as a midwife in August 1929.

She was a popular person and well known in Littleborough. Everyone she met on the street would stop for a chat. She knew many people who had been brought up in Littleborough, parents, grandparents and children.

Ivy was the youngest of four, she had three brothers. She was brought up on Church Street (the main road through the town) and she continued to live there with her sister-in-law till her death in March 1980.

She was educated at Littleborough Central School and would have been one of the first educated at the premises on Sale Street. Working life after school is a little sketchy but for a period of time, prior to qualifying as a midwife she worked shifts at Rakewood Mill, either six till two or two till ten. She’d walk to work up Hollingworth Road and (alongside Hollingworth Lake) on Rakewood Road.

During World War 1 her boyfriend, with whom she was very close, died in combat at the end of the war. It was a serious blow and broke her heart. She was never to marry.

A change was needed and she became ‘nanny’ for a family away from Littleborough. This was to change her role in life.

In the mid 1920s she decided to train as a midwife and qualified in 1929. During her training she met up with two other prospective midwives and they became close friends for the rest of their lives. Rhoda Wood joined Ivy working in Littleborough and Newhey (a neighbouring town). Marjorie Booth went out to Northern Rhodesia as a midwife and missionary. I was ‘fortunate’ to be delivered by all three midwives on 14th July 1947 and as such was able to call them all auntie.

During her time as midwife she rarely refused a request from a distraught husband as to the well-being of his wife. She would travel on the back of a tractor or the back of a bike holding on tightly to her instruments. Before telephones could be installed expectant fathers could be found banging rapidly on Ivy’s front door, even on Christmas Day. At some point she bought a car, an Austin 7, with the letters ‘BED’ (Babies Express Deliveries). The car was her pride and joy and kept going until she retired in 1960.

During the summer of 1954 during the school holidays I was able to be with her on her rounds when she was checking up on a mums and her babies (not on deliveries I hasten to add). A very clear recollection was at a cottage in Milnrow (a nearby town). Mum was upstairs with the baby and Dad was in the kitchen boiling water waiting for the call to take it up. Everyone did as they were told, including me. My good behaviour paid off as I was allowed to weigh the baby in the net attached to the scales.

Families were very generous and would often give Ivy a thank you in the form of food. Farming families in particular. During the war she would arrive home with meat or eggs. Quite often these homes were the most difficult to access.

In 1950 Ivy bought a caravan at Morecambe to get away for a break on her days off. It was convenient because the Ribble bus had a stop at the top of Church Street. (In Littleborough).

Ivy never lost her touch and in 1973, 1976 and 1979 she was on hand to give advice after the birth of her great grandnieces and nephews.

She has been missed by many and local people in Littleborough will have memories of their own passed down of their family’s interaction with Nurse Ellis.

When she passed away there was a photograph album full of pictures of the babies she had delivered. It was sent to me as a thank you. The album is now with Littleborough Historical Society who also have a collection of artefacts relating to Nurse Ivy Ellis, Midwife. 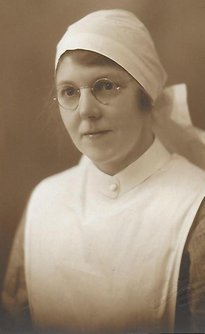 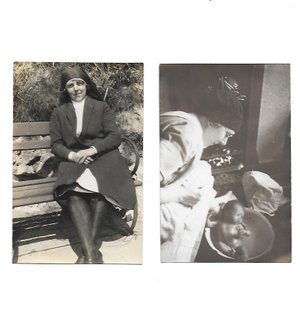 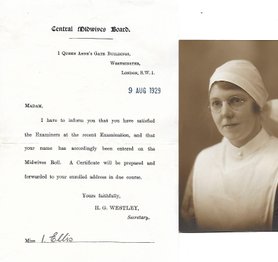 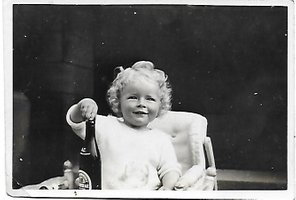