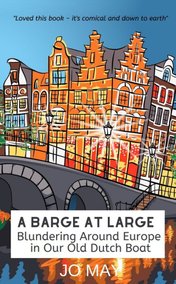 Reviewed in the United Kingdom 28 January 2021

A humorous take on real canal life, and the contribution from the pet just nailed it for me a very clever and entertaining style of writing can't wait for the next book, brilliant!

A Barge at Large is a light-hearted, humorous account of what happened when we took time out to live on a boat. Although based around the waterways of Europe there's plenty here for non-boaters as we travel from the north of Holland to Burgundy in France. The small barge was built in Groningen, Holland over 100 years ago and was in a sorry state when we bought her. In the early days there were times when we wondered what we'd done. The engine barely ran, the heating system didn't work and the rusty patches were growing like fungus on an old loaf.

Professional help was generally unaffordable so we learned to do things ourselves. 'Over time we gradually improved things to the point where they could at least have lunch without an alarm going off.'

Here is a brief extract relating the moment they set on their first cruise.......

'Following the vendors written instructions I turn the key and press the 'contact' button to start the engine. There follows a series of laboured grinding noises as it fails to fire up. The only sign of life is a worrying wisp of white smoke that appears from the back end. I am trying to be cool and calm to reassure Jan and the dog that this is quite normal. I leave it a minute and try again. Any hope of anonymity is blown out of the water when the beast finally explodes into life. It's a bit smoky – in fact it's a lot smoky. By the time it's settled down into a clattering, growling rhythm, roughly a third of the province of Overijssel has disappeared in a grey cloud. Despite our main audience being forty meters away across the harbour, their cornets get a coating of diesel soot. An alarming cacophony of hacking and choking is heard through the gloom.'

Things did improve - but not for a year or two.

Living on a barge is a life of compromise, less space yet more freedom, less cash but richer. There's no keeping up with the Jones' – if anyone starts being pompous we untie the ropes and go somewhere else. Travelling on rivers, lakes and canals can be exciting or frightening and we see a unique perspective on an alternative way of life.

The book relates the pleasures and quirks of new countries and the joy of meeting a wacky assortment of people. What's clear is that there's not really a typical boater, we are all different, having drifted into this watery existence from any number of directions. There are common problems such as misbehaving lavatories and dribbly windows but also shared delights such as the wildlife, windmills and wine.