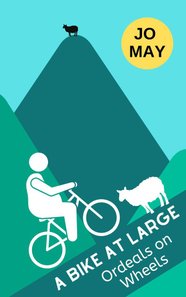 After 12 years on narrowboats and an old Barge, cycling is my latest means to escape the real world.

I've put together a (sometimes less than successful) introduction to electric biking, and plenty of stories about the places I've sped through (ahem) and people I've come across. Some even talked to me willingly.

A Bike at Large is the fourth book in Jo’s best-selling ‘At Large’ series. When he’s overtaken by a jogger on a borrowed mountain bike, Jo knows it’s time for drastic action. Welcome to the world of a man in his 60s and his new e-bike, Columbanus.

His first injury occurs in a matter of feet - setting off for his first practice ride round a car park, he misjudges the width of the handlebars and scrapes his hand on the cycle shop’s stone wall.  ‘You’ll go places you’ll never have dreamed of,’ promises the shop owner. Prophetic words indeed. Eighteen hours later Jo is embedded in his neighbour’s hedge due to a clothing malfunction; it’s just as well he put his ego and self-esteem in the top drawer in the kitchen before setting out.

With the emergency ambulance on speed-dial, Jo climbs a steep learning curve on a series of mini-adventures throughout the north of England, mercifully with a diminishing distance-to-injury ratio.  By calling his e-bike a ‘Lifestyle Investment,’ it takes his wife’s mind off the cost – a sensitive issue as she needs some new slippers. Asked whether he is searching for eternal youth, he replies, ‘Not really … more trying to keep out of my eternal hole in the ground.’

Fuelled by red wine and optimism, off he goes …

An Introduction to my biking tales

A special series on a magical area