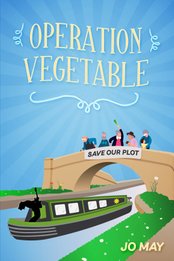 'Well written and amusing at times, amongst the serious situation the boaters found themselves in. His way with words comes across both descriptive and detailed. A good flow throughout the book. A really enjoyable read.'

Deep in the English countryside is an inland marina, home to a group of unlikely characters living on their narrowboats.

Life at Watergrove is carefree until a local land-owner decides he wants to build three luxury houses on the residents vegetable plot.

In an unaccustomed act of decisiveness the boaters decide to form a committee to fight this scourge.

H.Q. is the local pub and it's here that our ageing boaters raise a creaking battalion.

The boaters find help from an ageing rock star and a TV Gardening programme. Skirmish follows skirmish until one of the boaters is severely injured and the stakes are raised.

Has the despotic land-owner, a man of few morals, driven by power and greed, finally met his match? Will the boaters look like toothless turnips or can they cajole wobbly bodies, more suited to tea-drinking than physical endeavour, to mount the barricades?

Have the boaters simply lost the plot?

Operation Vegetable was formerly published as 'The Marina'.