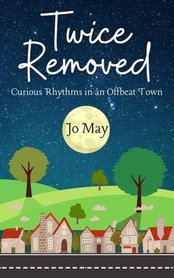 Nestling below the Northumberland hills in the north of England, it's a quirky place whose residents 'go to some lengths' to ensure their town avoids the maelstrom of the modern world.

Tony Mason is one such resident. He is walking past a bus when an elderly lady fell out of the door head first. He catches her preventing a nasty fall. It's an unusual encounter but the start of a fascinating, friendship. Called Julia, she touchingly describes their relationship as a crinkly love affair. She is over 80 but despite being unsteady on her feet, is bright and full of adventure. Tony, a generation younger, helps in her quest to find her family when she gets herself in a muddle.

Thistledean is a peculiar place but a warm place. There's a friendly welcome as long as you don't upset the equilibrium. One visitor who was showing off in the pub, tried to impose himself, threatening to buy property and 'knock some commercial sense into the lot of you.' The locals absorb the verbal assault and look on knowingly. When the man leaves, he finds his expensive motor car full of cow shit. Investigations are still ongoing, three years after the event. Evidence is proving difficult to come by!

The man hasn't returned, but a photograph of him discovering his violated motor hangs in the pub. Another amusing footnote has been added to Thistledean's history. It joins quite a number of others.

As one transient visitor said, ‘It’s somewhere I’m not sure I want to visit again, but perversely a place I would like to live.’