The Boggart of Hare Hill

A mysterious tale told by a dog called Frank. 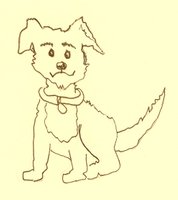 Says Frank, “Just to flesh that out a little, I’m actually a terrier. Well, nearly. There’s some poodle included but thankfully it wasn’t the dominant gene. On the plus side, the poodle bit means I don’t lose hair – unlike Dad!

So, what’s A Boggart? Well, it’s a creature that lives between myth and reality. A shape-shifting phantom that skulks in dark corners and takes on the shape of whatever is most feared by whoever gazes upon it. Not nice at all really. Folklore to humans, all too real for us dogs.

Dad and I walk in the park every day, early. He drags me out of the house at 5.00 AM so we see a world hidden to many - those that have the luxury of a lie in for example! I envy them with some vehemence when it's chucking it down. During our walks I read my newspaper. It’s an ever-changing newsreel of smells and sounds. My doggy friends leave messages. A procession of piddles and pongs tell me what’s going on in our world. Dad isn’t sensitive enough to pick up these messages. He just ambles along with a vacant expression on his face, humming songs from the 1970s.

We walk in the gloom of the pre-dawn morning and see all sorts of shadows and shapes that lurk in the murk. Well, I do. Poor Dad. His mind was cast adrift many moons ago. He now dreams of what a great future he has behind him.

Among the many things I pick up on is The Boggart who lives in our park.

The Boggart patrols by night, floating and swirling like a malevolent mist, weaving among the trees, rustling in the bushes. He stalks the deer, hounds the foxes and scares dogs.

But these days he only watches on. A century ago, he was more sinister, wicked even. He frightened every living thing he encountered. He played on their fears, changed his form, personified their nightmares. The park was largely silent in those days and the only night-time visitors were unaware of The Boggart’s existence, at least to begin with. These visitors only came once.

Many years ago, a wealthy family owned Hare Hill House, the imposing property that is the focal point of our park. They also owned a monkey called Mephisto! A family pet it is presumed. Sadly Mephisto died, aged two, when he supposedly fell out of a window. He is buried close to the house and must have been loved because his gravestone is still there today, tended lovingly by the park keepers. Mephisto is a creature of legend hereabouts. In fact, with a bit of imagination, one could imagine Mephisto being Littleborough's Loch Ness Monster. With a lot of imagination.

For many months after Mephisto died, during the dark hours, The Boggart tormented the poor monkey's soul. He teased and taunted and allowed him no peace. The Boggart persecuted poor, gentle Mephisto to the point where, one night, during a torrential thunderstorm, the monkey’s spirit fled. With a cry of anguish, Mephisto disappeared into the maelstrom, never to return. The Boggart had reclaimed his territory.

Many years later, close to his empty grave, a wooden carving was erected in Mephisto’s memory. But all is not what it seems. Look into the monkey’s eyes by day and you will see, deep within, the vengeful eyes of The Boggart. During waking hours, the creature watches on with smouldering eyes, waiting for the night. When darkness falls beware, because a rustle of the leaves or a sigh in the tree tops may mean The Boggart is afoot.

Gives me the shivers I can tell you. As Dad and me walk in the dark I can feel the confounded creature circling and watching. As night recedes, he returns silently to his lair, like a genie returning to a lamp. Get too close in the half-light of early morning and we dogs can hear an ominous rumble from deep within the monkey.

(Mind you, you’d probably grumble if dogs piddled on you regularly.)

Dad’s oblivious to it all of course. Can you believe, he thought Boggart was something you hung in the downstairs privvy! At moments like this I wish I was 'pretty vacant' too. Huh, see that? A sneaky reference to one of his dreadful musical fancies, by the Socks Pistols I believe.

He's so out of touch, he doesn’t even know I’m starting a regular column on the World Wide Wag.

It will be a dog’s eye view of a crazy world called, 'Let’s be Frank.'

Should be a bit of fun.

À Bientôt. (That's French for 'see you soon'. In deference to my friend, Julia, a Picardy Spaniel, who you will meet in due course).