Here is a brief, personal story of one of the 19,240 British soldiers who died on the first day of the Battle of The Somme.

My wife, Jan, began researching her family ancestry in early 2013 and came across Percy Kershaw, her father’s half brother. In effect Percy was Jan's half-uncle. By the time she'd finished she felt much closer to him than that. She unearthed a pretty extraordinary story.

Percy as born in 1893. Originally he lived in Middleton (close to Manchester) but moved with his family to Moss Cottage, Smithy Bridge (between Rochdale and Littleborough) in 1911. He was a groom and employed as assistant coachman to Dr George MacGill, Hollingbrook House, Littleborough.

This is the first coincidence associated with this story. My father was consultant chest physician and a colleague of one Dr MacGill in the 1960s and 70s. I can only surmise that George MacGill was father to the one my Dad knew. I remember visiting their house when I was a child.

At the time of Jan’s investigations we lived in France. She found a photograph of Percy, cap at a jaunty, carefree angle. She also found out where he had died. In May 2013 we were driving from Calais to our then home in St. Jean de Losne, Burgundy and stopped en route at The Beaumont-Hamel Newfoundland Memorial to pay our respects to Jan's Uncle Percy. He is buried there, in Hawthorne Ridge Number 2 Cemetery having died on 1st July 1916, the first day of The Battle of The Somme. He was fighting with the 1st Border Regiment alongside the Newfoundland Regiment as part of the 29th British Division.

Move forward a couple of years and we had moved to Diksmuide, Flanders, a town on the River Ijzer (Yser) approximately 15 kilometres inland from Nieuwpoort on the Belgian coast. Here Jan continued her ancestral research and made a second discovery of extraordinary coincidence. She found that two years prior to his death, Uncle Percy had been fighting in Flanders. Unbeknown to us and quite coincidentally he had been fighting mere metres from where we then moored our boat. It was one of those coincidences that sends shivers down your spine.

More so when, on an internet site, she came across the following on the Ypres Battlefields forum:

“On the morning of the 29th October the battle had been in progress for 36 hours, and the whole of that time we had been holding a position near Diksmuide (Belgium) firing at each other the whole time, and we could not advance as we were not strong enough, and we were waiting for reinforcements which never came. In the meantime the Germans got up their reinforcements and they came on in great masses until they were 50 yards from our trench, and to save ourselves we had to charge, and the mix up lasted about half an hour. Then off went the Germans as fast as they could go with us hard on their heels. During the mix up I got my arm ripped up. This happened about 11 am and at 4pm I got a bullet through the leg. After that I knew nothing more until it was quite dark and all was silent. At first I could not tell what had happened, then I tried to rise, but I could do nothing beyond getting on my knees. I then looked round and found the direction I had to take to get back to a field hospital, at least two miles, so I started crawling, rolling, anything to get back. At last I became exhausted again and lost consciousness. The next I knew I was laid on some straw in a temporary hospital in Ypres, and I was told that I was to be sent to England that day.

I am getting on splendidly, so I should be home soon.”

In a further letter dated 14th November he wrote:

“I shall not be home quite as soon as I expected, because I have had to undergo another operation”.

On the 16th November he had four bullets extracted from his leg.

We might have expected that with such injuries he would remain in England but no. On Saturday the 1 July 1916, Littleborough (Lancashire, England) born 24 year old Sergeant 10358 Percy Kershaw, 1st Battalion Border Regiment was killed in action in Franc. His Battalion's objective on the 1st July was the capture of Beaumont Hamel.

He is buried in Hawthorn Ridge Cemetery No 2 Auchonvillers, Somme, France. Grave Number A. 2.

Jan carried out her research on the computer in the wheelhouse of our old boat. Behind her, across the river looms the Ijsertoren (Yser Tower), a Flemmish memorial to those that died on Belgian soil. The current tower is a larger replacement for the original which was destroyed in 1946 (either for political purposes by the state or the resistance, nobody is quite sure and the perpetrators were never caught). From the ruins of the original tower the ‘Gate of Peace’ was built. PAX (Peace) is written over the gate.

The Ijsertoren is huge. Standing 84 metres, it broods and watches over the town, somewhat malevolent. It is a museum dedicated to 'War, Peace and Flemish Emancipation'. It is rather too Nationalistic and quasi-religious for my liking, but nevertheless a fitting tribute to those who died. Views from the terrace at the top seem endless and stretch many miles over the flat landscape.

We're not sure exactly where Percy was fighting when he was wounded in 1914 but we can be sure it was close to where we moor the boat on the River Yser here in Diksmuide. There is a preserved trench a few hundred metres north, probably a replica of where Percy and his colleagues spent terrified hours and from where they launched their counter-attack. It's now a 'tourist' spot known as The Trench of Death and hundreds of visitors come to glimpse the past and try to imagine the horror and claustrophobia of life in a filthy trench.

Percy recovered from his injuries, returned to duty and rejoined his battalion in France. Jan, in her northern way, said light-heartedly, ‘daft bugger should have stopped at home.’

Shortly after 7.30 AM on 1st July 1916, the first day of The Battle of The Somme, Percy would have gone over the top with his comrades. God only knows the fear he must have felt as time ticked down. Though he didn’t know it, he was about to take his last few steps. In the mud his life ticked away.

Can you imagine that waiting?

Listening to interviews with survivors many years later he would have put personal feelings aside and gone, not least for fear of letting down his mates.

Percy was one of thousands who showed incredible courage.

The Beaumont-Hamel Newfoundland Memorial site is the largest area of The Somme battlefield to have been preserved and one of only a few where you can see trenches. The 74-acre site was purchased by Newfoundland in 1921 and was one of six Newfoundland memorial sites set up following the first world war. (Newfoundland was a dominion of the British Empire at this time till it became part of Canada in 1949). The memorials themselves are huge bronze caribou that stand atop mounds of Newfoundland granite. The caribou stand facing their former foe with their heads held high in defiance, not dissimilar to the lion atop the Menin Gate in Ypres which looks out over the battlefields. The site contains three commonwealth cemeteries including Hawthorne Ridge Number 2 Cemetery, which houses Percy Kershaw's grave.

The memorial site is staffed by Canadian students, politely and reverently, and is beautifully kept.

Jan believes that we are the first family members to visit his grave. The day we visited it was raining. Puddles had begun to form in the grass-filled bomb craters and trenches but we don't even begin to get an idea of the nightmare it must have been for Percy and his comrades amidst the mud and murder in 1916.

Jan was given a copy of an official card that documents Percy's various campaign medals. Written on the card, K in A. On the hundredth anniversary of the start of The Battle of The Somme that card was centre stage on our mantelpiece as we watched the commemorations on television.

At that moment he was a distant relative in time and place, but certainly not in spirit. 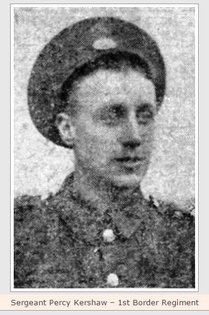 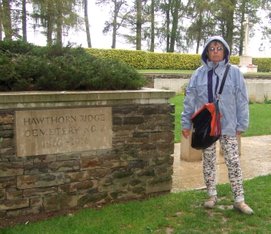 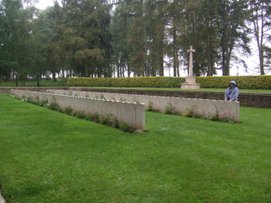 Jan with Uncle Percy and his comrades 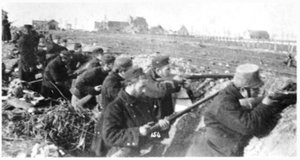 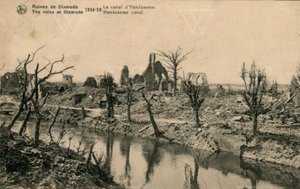 Wasteland by the River Yser 1914 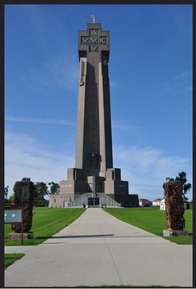 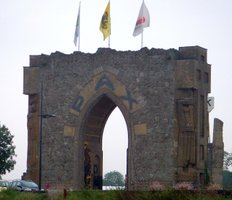 PAX Gate. The Gate of Peace 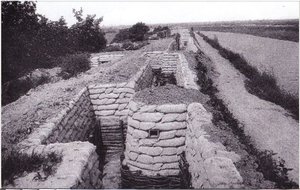 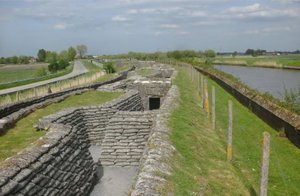 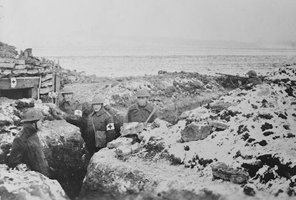 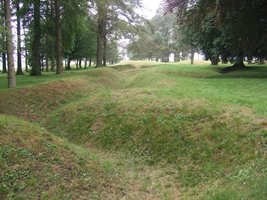 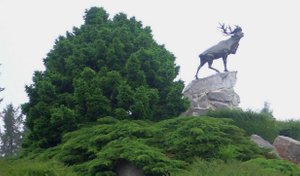 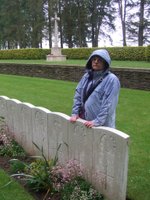 Jan with Uncle Percy and his gravestone